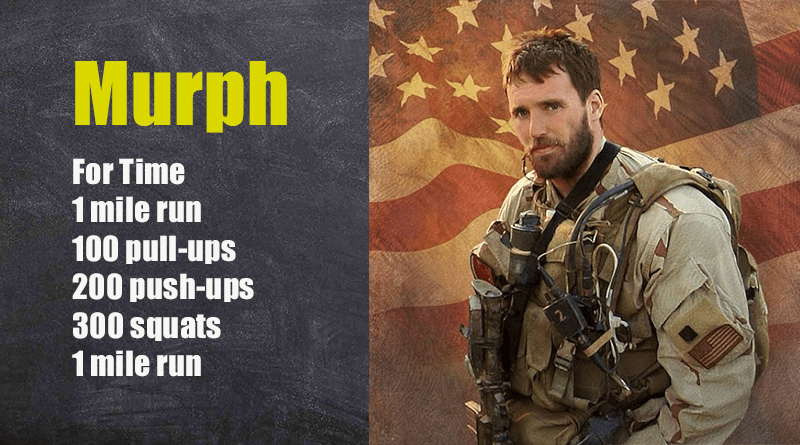 The last few months have been unprecedented when it comes to how we live our daily lives.  Working from home, homeschooling our children, and spending more time indoors without much of the human contact we crave.  Even if we don’t crave it, many of us realize just how much we miss it after it is taken away.  We have all had to make certain consolations, compromises, and sacrifices during this time.  We are trying to survive, not thrive during this time.

With gyms slowly reopening and Memorial Day coming up, this got me thinking about how to go about executing probably the most popular and recognizable CrossFit HERO Workout there is: MURPH.  The basis behind any HERO workout, in my opinion is to honor those that it is named for, reaching deep within yourself to find that inner strength, remembering their sacrifice and pushing yourself most likely beyond where you think you can go both physically and mentally.  They are long workouts and meant to be grueling, but man, can they be fun!  MURPH is one of those I always look forward to.

But for a lot of us, we have spent the last few months doing exactly this: searching for that inner strength, achieving things in manners we didn’t think possible, surviving each day. We have been making the most of at-home workouts and finding new and creative ways to stay fit outside the four walls of our gyms while entertaining stir-crazy kids or taking up new hobbies. And we are exhausted.  We HAVE sacrificed.  As a Navy veteran and former Army Wife, I will also tell you that just because your sacrifices were not made on the battlefield, does not make them any less valid or real.

So this Memorial Day, if you have the opportunity to find a gym that is open and are able to complete MURPH, consider these sacrifices. Consider: your workload, how much you have been actually working out, have you been prepping for this workout, how much of that 20lb weight vest you normally wear are you carrying around daily now because of your diet, ARE YOU REALLY READY?  The thing about MURPH is it’s high volume.  Many of you have been relegated to body weight movements anyway due to lack of equipment so your pushup and squat game may be STRONG!  But what about Pullups?  What is your strict strength like right now?  Attempting 100 of them for the first time in over a month (even a week) can put some serious strain on your body.  The risk of injury is extremely high.

Unless you are a competitive athlete (in which preparedness for this WOD should not be an issue), your goal at the gym is most likely to maintain a certain level of fitness and probably look good naked.  In order to maintain that level or even improve, your biggest goal should be to remain PAIN FREE!  So when thinking about how you are going to go about MURPH this year consider one last thing: sometimes the greatest example of mental toughness is doing what is right, and in this instance that is SCALING!  It’s easy to go HAM all the time, but is it the right thing to do?  I recognize that making the decision to scale MURPH after everything that we have been through may not be what you want to hear, but it is what you NEED to hear.

So go to the gym, do ring rows or bent over DB rows for the pullups, drop to your knees for the pushups, squat or do push ups to a box or ball if your range of motion is not what it used to be.  Bike instead of run.  Grab your SwoleMate and make it a PartnerWOD.  As coaches, we want you to always understand the intent of the movement and workout so you know what level of intensity you are trying to achieve.  So don’t forget the intent of MURPH, the intent of MEMORIAL DAY: to come together as a community and honor those who have made the ultimate sacrifice.  The minute you have walked in that door to the gym you have done that.  Clicking the Rx button doesn’t change that. 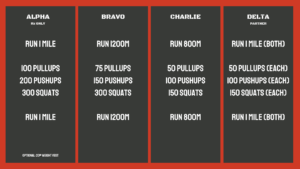 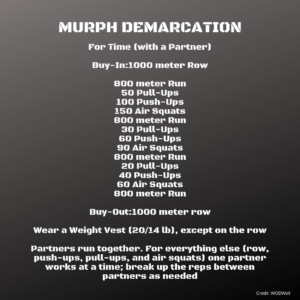 Who is LT Michael P. Murphy?

Michael P. Murphy (SEAL) was the officer-in-charge of a four-man SEAL element in support of Operation Red Wings, tasked with finding a key anti-coalition militia commander near Asadabad, Afghanistan. Shortly after inserting into the objective area, the SEALs were spotted by three goat herders who were initially detained and then released. It is believed the goat herders immediately reported the SEALs’ presence to Taliban fighters.

A fierce gun battle ensued on the steep face of the mountain between the SEALs and a much larger enemy force. Despite the intensity of the firefight and suffering grave gunshot wounds himself, Murphy is credited with risking his own life to save the lives of his teammates. Murphy, intent on making contact with headquarters, but realizing this would be impossible in the extreme terrain where they were fighting, unhesitatingly and with complete disregard for his own life moved into the open, where he could gain a better position to transmit a call to get help for his men.

Moving away from the protective mountain rocks, he knowingly exposed himself to increased enemy gunfire. This deliberate and heroic act deprived him of cover and made him a target for the enemy. While continuing to be fired upon, Murphy made contact with the SOF Quick Reaction Force at Bagram Air Base and requested assistance. He calmly provided his unit’s location and the size of the enemy force while requesting immediate support for his team. At one point, he was shot in the back causing him to drop the transmitter. Murphy picked it back up, completed the call and continued firing at the enemy who was closing in. Severely wounded, LT. Murphy returned to his cover position with his men and continued the battle.

LT. Murphy fought on, allowing one member of his team (Marcus Luttrell) to escape, before he was killed. For his selfless actions, LT. Michael Murphy was posthumously awarded the Congressional Medal of Honor on October 27, 2007. We honor his sacrifice and memory through The Murph Challenge. Find out more about Michael Murphy at the Memorial Foundation created in his name.[1]

One Reply to “Mental Toughness: Completing Murph during COVID Crisis”

This site uses Akismet to reduce spam. Learn how your comment data is processed.

« CrossFit Dunwoody on the What’s Up Dunwoody Podcast

How To Optimize Your Warmup And Cooldown Routines »