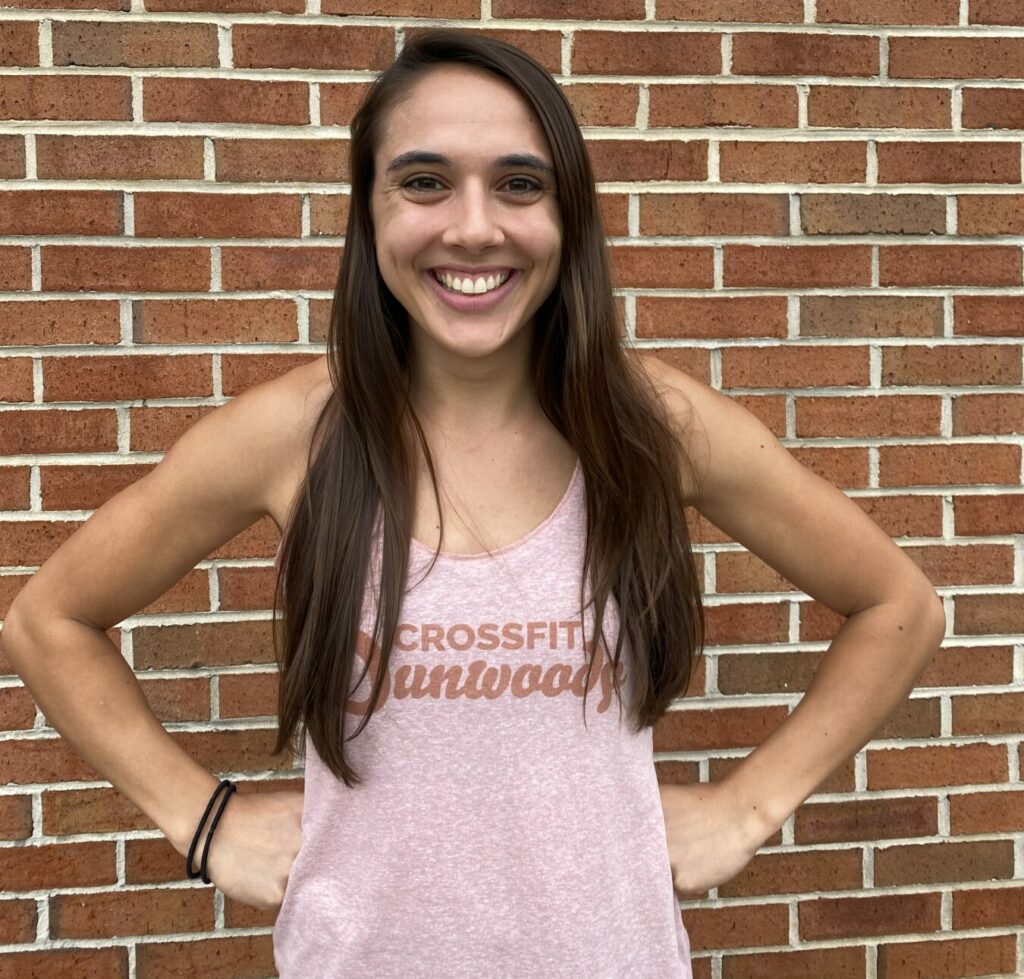 Katy was lucky enough to compete at the collegiate level in track & field as a triple jumper and a 100-meter hurdler. When she graduated, though, she felt lost. Having wrapped her identity up in being an athlete for so long, she did not know where to go from there. After some dead ends both professionally and athletically, a friend suggested she try CrossFit. In 2016 she took my first class and did not just drink the kool-aid… she injected it directly into her veins. A few months into her journey, the owner at her first box approached her and said he thought she would be a good coach.

Katy says, “Honestly, I did not know why he suggested that as I never thought of myself in that light. I knew I loved CrossFit and that I wanted to do something in this space, I just didn’t know what. With a background in D3 athletics, the odds of me making it as a pro CrossFitter were obviously very slim. Still, standing in front of a class of people and leading them felt like an even further fetched idea (public speaking has always been one of my biggest weaknesses.) Nonetheless, I decided to see what this whole coaching thing was about. I studied for my Level 1, shadowed the coaches at the box, and when I attended my Level 1 weekend, I fell completely in love with the coaching side of the sport. Until that point, I believed the only way I was supposed to exist in the world of sports was as an athlete…it never occurred to me that I could grow to become something else. That weekend developed in me a passion I did not know was there: to help others achieve their own personal and fitness goals.

After that, all I wanted to do was learn as much about coaching as I could. Less than a year after my Level 1, I earned my Level 2, and about a year after that, I received my CrossFit Kids Certification. My biggest coaching goal right now is to become Level 3 certified in the near future. Every step of the way, I try to look at my goals through the lens of: will this help me help others better? If I see a clear “yes”, then I move forward. If that goal seems to be rooted in selfish ambition, I pause and dig to understand the real root of my “why”. Though, of course, I still struggle with selfishness, coaching has allowed me the opportunity and challenge to set goals for the betterment of not only myself but for all the incredible people I get to come in contact with every single day.”

Katy’s favorite WOD is the classic CrossFit girl benchmark “Annie” (50-40-30-20-10 doubles unders and ab mat sit-ups), because when she first started CrossFit and wanted to get more proficient at double-unders, I started doing “Annie” as a warmup 3x/week. Eventually the combination of movements became one of her favorite workouts of all time! Her certifications include CF-L2, CrossFit Kids, and aspiring L3 by the end of 2021.

To anyone considering joining CrossFit Dunwoody, Katy says: “When you come in here, our goal is to help you have the best hour of your day. As coaches, that is certainly what all our members grant us.”